After delivering the fruit-picker, I was once more at Deeping Lakes, this misty moisty morning. It felt ‘very birdy’, but it was a case of the usual suspects. Until, that is at 7.25, i heard the unmistakable call of a Whimbrel, and a30 seconds later, 2 Whimbrels came low over, calling. These are the first Whimbrels I have seen since many months ago, in the spring. They are quite scarce passage birds in these here parts.

I didn’t photograph them, but did take a few snaps of a Black-headed Gull which appeared to have an ‘oiled’ belly and breast, making it look like a hybrid with a Grey Plover. It reminded me of the horror of my youth, when oiled spills seemed to be happening all the time, and oiled seabirds were almost the norm. Also at DL this morning were a flock of 4 Red-crested Pochards and the first Wigeon I have seen for several weeks. 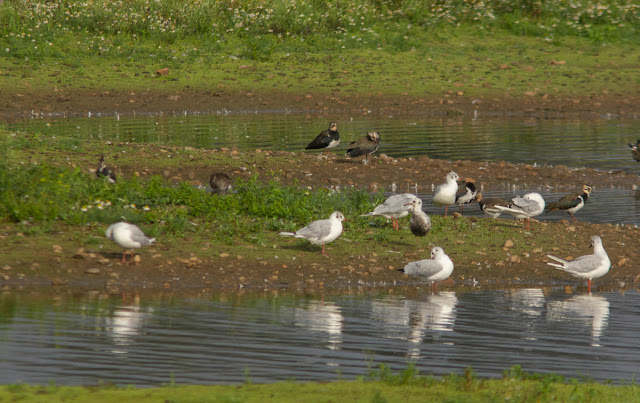 At lunchtime, I popped into the garden for a cuppa. A Chiffchaff was calling, a flock of 6 Swallows passed overhead (unusual here), as a bit of early ‘vis mig’ and insects included a Migrant Hawker dragonfly, and Holly Blue and Red Admiral butterflies. Our tired old Speckled Wood still soldiers on with three wings…