Today’s insect seen perching on our pond vegetation was a handsome wasp. Clearly a social wasp, it was nearly black all over, with limited yellow markings. I don’t remember seeing one of these beasties before, but it turns out it was a Median Wasp, a relatively recent coloniser through southern England since the early 1980s. Workers can be blackish like this one, but all show yellow chevron ticks (resembling the Nike logo, apparently) at the front of the thorax (which you can just see in this photo. 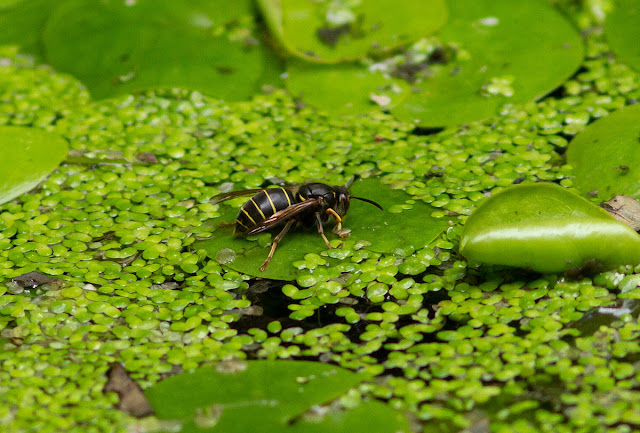 You guessed it, in the evening I was once more checking the south Lincolnshire pits (ie in the Deepings area). The most interesting birds were 4 Icelandic Black-tailed Godwits resting on the Baston and Langtoft ‘wader pit’. We seem to be having another pulse of these lovely waders through the Peterborough area (after one a few weeks ago, followed by a lull).

Later, I popped into Southey Wood to see if the Crossbills were still in place. I found a few juveniles and at least one adult female, all in the usual Western Hemlock trees. But, if the rest are still around (which I suspect they will be) they were not playing ball, and remaining hidden, quietly feeding. Interestingly, there appears to be a new pulse of Siskins into the same trees as the Crossbills. At one stage I was watching a streaked juvenile Siskin feeding alongside a similarly streaked juvenile Crossbill. The size difference was absurd!