I haven’t done very much ‘moth trapping’ in recent years. This is partly owing to the facet that when we had a Honey Bee ‘hive’ in one of our compost bins the traps were catching far too many bees! Unfortunately, although we try to catch moths then release them, some insects get into the trap and die as a consequence; and I was increasingly uncomfortable with the amount of ‘dead by-catch’!

Anyhow, one moth I used to catch quite a bit was the Small China-mark. I just popped out and saw what I think is a male flitting around the surface of our pond. They are unusual moths, partly because the caterpillar is aquatic, living in ponds wrapped in a tube of leaves like a caddis-fly larva, often of Duckweed, which is also one main food plant. Well, we have plenty of Duckweed in our pond, so the Small China-marks should be happy! Incidentally, those water lily pads are in fact Frogbit eaves and only a couple of inches across… 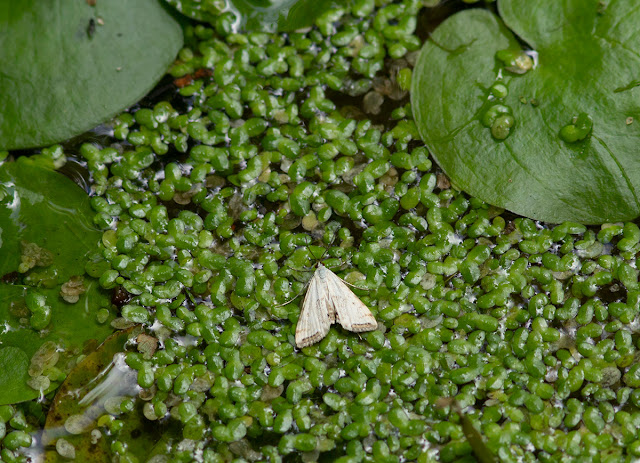 In the evening (which was pretty cold and windy from the NW), I popped up to Deeping Lakes, having heard that there had been one or two interesting passage waders there earlier, including a Black-tailed Godwit and a couple of Dunlin. These birds had moved on, but there were a couple of Common Sandpipers, and better than them, a Turnstone. I think this is only the second Turnstone I have seen in the PBC this year, after an overwintering bird which was enjoying some flooded fields. I believe it was a female, as it was quite dark headed, and not particularly bright orange on the back, although the odd looking greater coverts may mean it wasn’t a full adult after all (I claim no expertise whatsoever on the moult or otherwise of waders!).

Anyhow, it looked tired yet nervous, like a bird freshly in, and wasn’t doing much. Then I heard some soft Turnstone flight calls and when I looked I couldn’t see it. I moved screens, and saw it wondering around the Rock Island where the Lapwing had been pecked by gulls a few nights ago. A Coot chased it off and it went back nearer to the first screen, where it started to bathe. Then it moved closer still, but was chased a little by Lapwings, before settling down. I took a few photos. 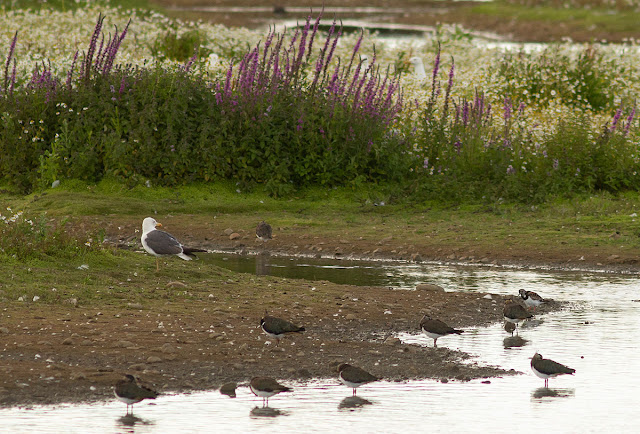 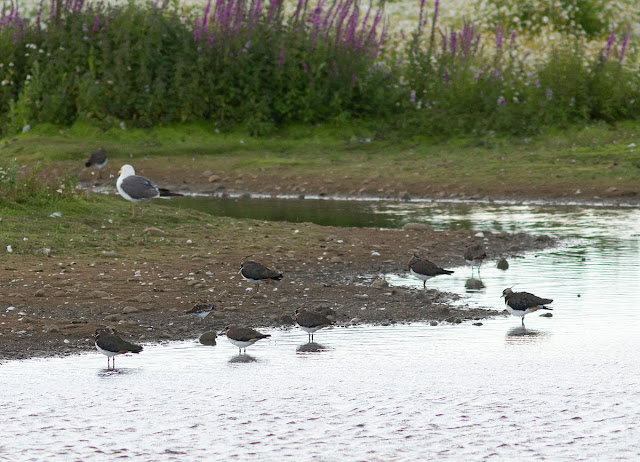 Eventually to cold got too much for me, and I drove to the Baston and Langtoft pit complex. I checked the New South Pit, where there was a juvenile Greenshank, a Green Sandpiper and a Common Sandpiper. Then I heard a familiar yet unfamiliar call from above: surely a Turnstone! I looked up and a Turnstone came flying over calling (heading west). I presumed this was a different bird from the Deeping Lakes bird, which seemed settled when I left andthis pit is more than 4 miles NW of Deeping Lakes.

After a while, I drove down the road heading further north to the Wader Pit. There were 6 adult Dunlins, here, 3 Common Sandpipers and a Turnstone! This time, it was on the mud, so I was able to check its plumage with my scope. It looked very similar to the Deeping Lakes bird, even though this pit is 5 miles away as the Turnstone flies! It felt like I had been followed from pit to pit by the Turnstone.

At 8.40pm, something spooked the Dunlins and the Turnstone, which flew as the lead bird, as if the king of smaller waders. And although at least four of the Dunlin retuned to the mud, I could hear the call of Turnstone once more in the north. Perhaps it returned having found no suitable habitat close by to the norht. But I had already gone home by the time it did, if it did…