Skip to content
The Speckled Wood butterfly in our garden is still doing his best to see off all comers of any species, which in the afternoon included a Red Admiral which popped in for a look around. Perhaps it was attracted by one of our buddleias which is starting to get into nice bloom.
In the evening, I was once again at Deeping Lakes. Just outside the reserve, there was a gathering of many hundreds of gulls in a grassy field, presumably eating newly hatched flying ants. They were mostly Black-headed Gulls, plus Lesser Black-backed Gulls, and several adult Common Gulls (which are less common around here in summer).
At Deeping Lakes LWT reserve, itself there were three Common Sandpipers, 3 Dunlins (including 2 juveniles) and full sized juveniles of both Great Crested Grebe and Egyptian Goose, neither of which can have come from this sites (where the youngsters of both species were predated ages ago).
I witnessed something deeply unpleasant, but which I guess is ‘natural’. A couple of full-sized juvenile Lesser Black-backed Gulls (probably siblings, and certainly not from Deeping Lakes, where the colony has been wiped out by predation), were attacking an adult Lapwing, which seemed unable to fly away, and its legs seemed not to be able to hold it properly either. Anyhow, the attack was ruthless and the poor Lapwing was being plucked and even eaten a bit (from a wound on its back) while still alive. Then the gulls got bored and left it moribund. A Moorhen and a Coot came to look at the poor Lapwing, and adults of Herring Gull and lesser Black-back also gave it a cursory glance, before getting back to preening and loafing. 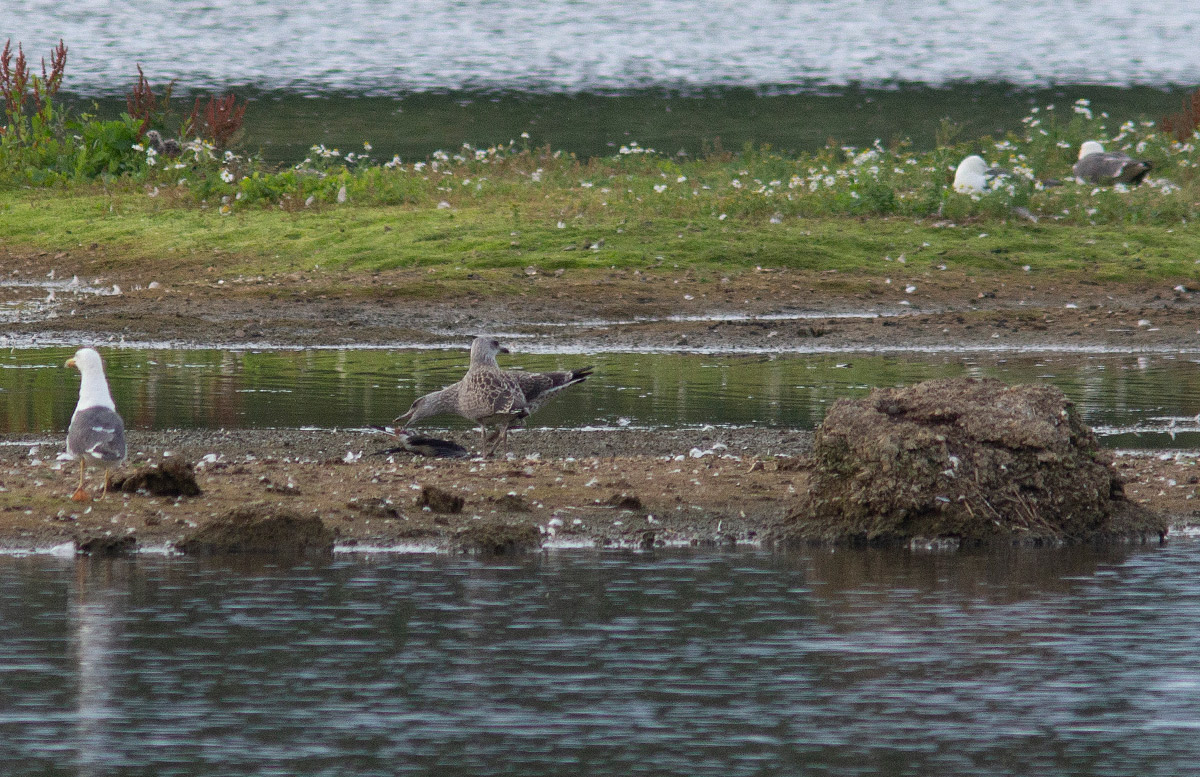 Juvenile Lesser Black-backed Gulls attacking an adult Lapwing, Deeping Lakes LWT, Lincs, 24.7.20
The poor Lapwing was destined to join the growing menagerie of dead birds lying around the east pit, which seem never to even be pecked at by the gulls (which scrap over bits of dirty plastic at rubbish tips, but ignore this source of protein!