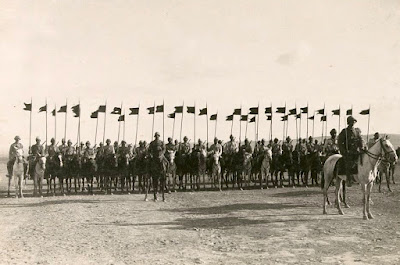 Today's picture shows a group of Turkish Lancers in World War I. The flags they are carrying in fact are weapons . . . very long spears that would be used to attack infantry. The picture was taken in 1917 near Beersheba in the Middle East.

World War I was interesting in that it was a mix of ancient and modern warfare. In the same war, swords, spears, horses were used alongside airplanes, machine guns and chemical weapons.